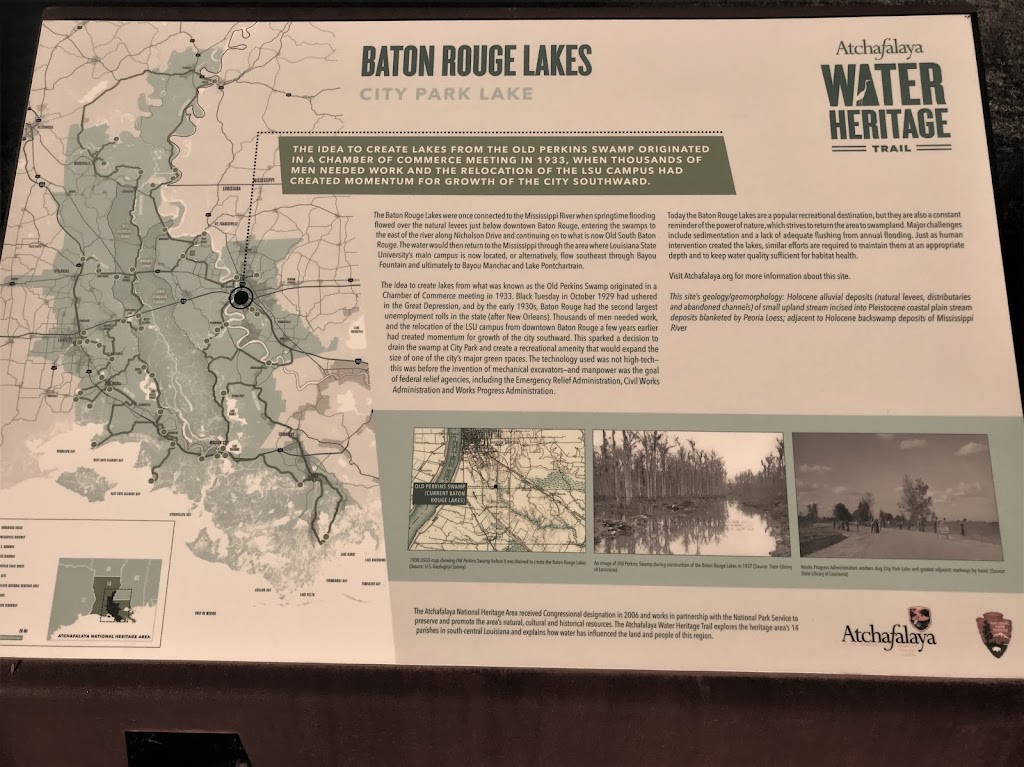 The idea to create lakes from the old Perkins Swamp originated in a Chamber of Commerce meeting in 1933, when thousands of men needed work and the relocation of the LSU campus had created momentum for growth of the city southward.

The Baton Rouge Lakes were once connected to the Mississippi River when springtime flooding flowed over the natural levees just below downtown Baton Rouge, entering the swamps to the east of the river along Nicholson Drive and continuing on to what is now Old South Baton Rouge. The water would then return to the Mississippi through the area where Louisiana State University’s main campus is now located, or alternatively, flow southeast through Bayou Fountain and ultimately to Bayou Manchac and Lake Pontchartrain.

The idea to create lakes from what was known as the Old Perkins Swamp originated in a Chamber of Commerce meeting in 1933. Black Tuesday in October 1929 had ushered in the Great Depression, and by the early 1930s, Baton Rouge had the second largest unemployment rolls in the state (after New Orleans). Thousands of men needed work, and the relocation of the LSU campus from downtown Baton Rouge a few years earlier had created momentum for growth of the city southward. This sparked a decision to drain the swamp at City Park and create a recreational amenity that would expand the size of one of the city’s major green spaces. The technology used was not high-tech—this was before the invention of mechanical excavators—and manpower was the goal of federal relief agencies, including the Emergency Relief Administration, Civil Works Administration and Works Progress Administration.

Today the Baton Rouge Lakes are a popular recreational destination, but they are also a constant reminder of the power of nature, which strives to return the area to swampland. Major challenges include sedimentation and a lack of adequate flushing from annual flooding. Just as human intervention created the lakes, similar efforts are required to maintain them at an appropriate depth and to keep water quality sufficient for habitat health.