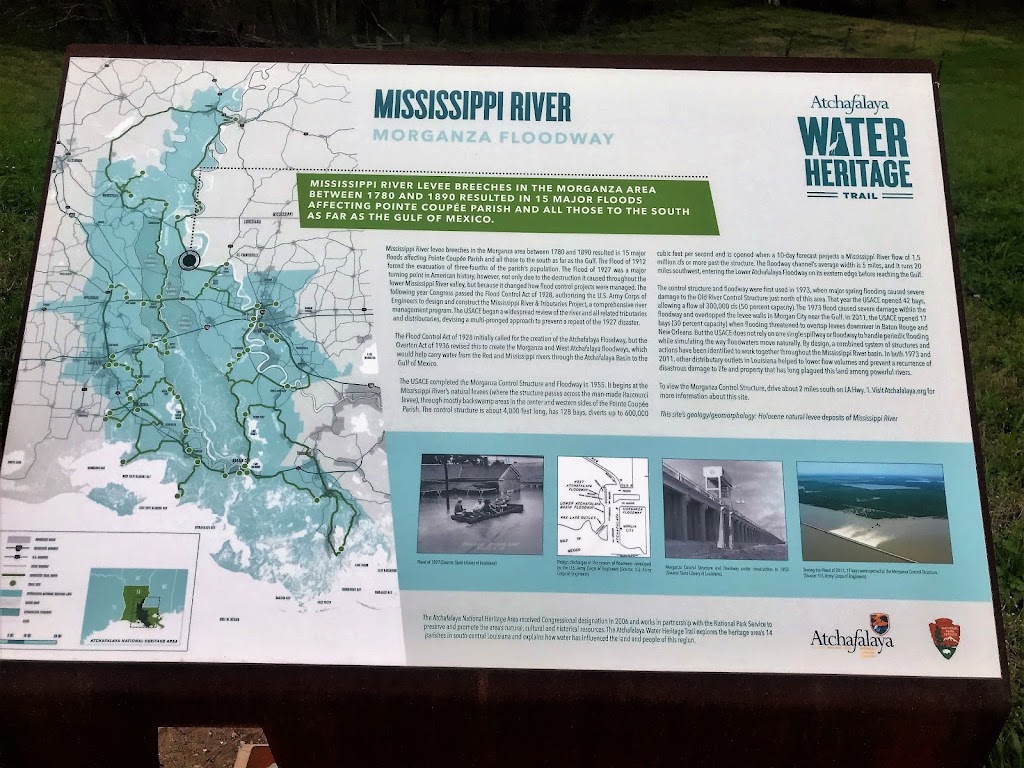 Mississippi River levee breeches in the Morganza area between 1780 and 1890 resulted in 15 major floods affecting Pointe Coupée Parish and all those to the south as far as the Gulf of Mexico.

Mississippi River levee breeches in the Morganza area between 1780 and 1890 resulted in 15 major floods affecting Pointe Coupée Parish and all those to the south as far as the Gulf. The Flood of 1912 forced the evacuation of three-fourths of the parish’s population. The Flood of 1927 was a major turning point in American history, however, not only due to the destruction it caused throughout the lower Mississippi River valley, but because it changed how flood control projects were managed. The following year Congress passed the Flood Control Act of 1928, authorizing the U.S. Army Corps of Engineers to design and construct the Mississippi River & Tributaries Project, a comprehensive river management program. The USACE began a widespread review of the river and all related tributaries and distributaries, devising a multi-pronged approach to prevent a repeat of the 1927 disaster.

The Flood Control Act of 1928 initially called for the creation of the Atchafalaya Floodway, but the Overton Act of 1936 revised this to create the Morganza and West Atchafalaya floodways, which would help carry water from the Red and Mississippi rivers through the Atchafalaya Basin to the Gulf of Mexico.

The USACE completed the Morganza Control Structure and Floodway in 1955. It begins at the Mississippi River’s natural levees (where the structure passes across the man-made Raccourci levee), through mostly backswamp areas in the center and western sides of Pointe Coupée Parish. The control structure is about 4,000 feet long, has 128 bays, diverts up to 600,000 cubic feet per second and is opened when a 10-day forecast projects a Mississippi River flow of 1.5 million cfs or more past the structure. The floodway channel’s average width is 5 miles, and it runs 20 miles southwest, entering the Lower Atchafalaya Floodway on its eastern edge before reaching the Gulf.

The control structure and floodway were first used in 1973, when major spring flooding caused severe damage to the Old River Control Structure just north of this area. That year the USACE opened 42 bays, allowing a flow of 300,000 cfs (50 percent capacity). The 1973 flood caused severe damage within the floodway and overtopped the levee walls in Morgan City near the Gulf. In 2011, the USACE opened 17 bays (30 percent capacity) when flooding threatened to overtop levees downriver in Baton Rouge and New Orleans. But the USACE does not rely on one single spillway or floodway to handle periodic flooding while simulating the way floodwaters move naturally. By design, a combined system of structures and actions have been identified to work together throughout the Mississippi River basin. In both 1973 and 2011, other distributary outlets in Louisiana helped to lower flow volumes and prevent a recurrence of disastrous damage to life and property that has long plagued this land among powerful rivers.

To view the Morganza Control Structure, drive about 2 miles south on LA Hwy. 1.