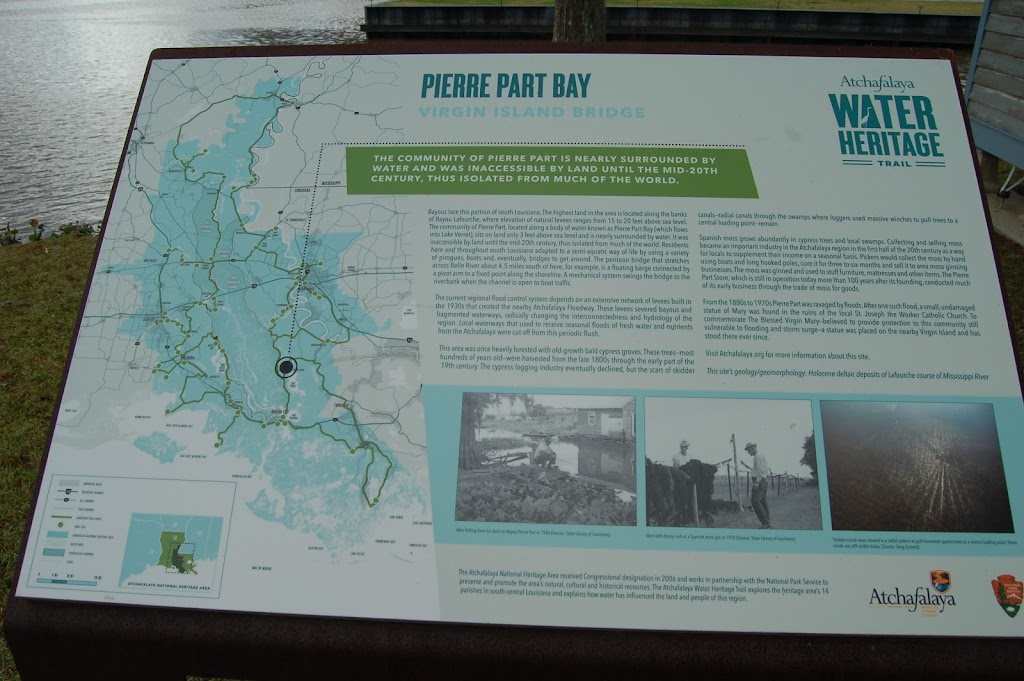 The community of Pierre Part in nearly surrounded by water and was inaccessible by land until the Mid-20th century, thus isolated from much of the world.

Bayous lace this portion of south Louisiana. The highest land in the area is located along the banks of Bayou Lafourche, where elevation of natural levees ranges from 15 to 20 feet above sea level. The community of Pierre Part, located along a body of water known as Pierre Part Bay (which flows into Lake Verret), sits on land only 3 feet above sea level and is nearly surrounded by water. It was inaccessible by land until the mid-20th century, thus isolated from much of the world. Residents here and throughout south Louisiana adapted to a semi-aquatic way of life by using a variety of pirogues, boats and, eventually, bridges to get around. The pontoon bridge that stretches across Belle River about 4.5 miles south of here, for example, is a floating barge connected by a pivot arm to a fixed point along the shoreline. A mechanical system swings the bridge to the riverbank when the channel is open to boat traffic.

The current regional flood control system depends on an extensive etwork of levees built in the 1930s that created the nearby Atchafalaya Floodway. These levees severed bayous and fragmented waterways, radically changing the interconnectedness and hydrology of the region. Local waterways that used to receive seasonal floods of fresh water and nutrients from the Atchafalaya were cut off from this periodic flush.

This area was once heavily forested with old-growth bald cypress groves. These trees—most hundreds of years old—were harvested from the late 1800s through the early part of the 19th century. The cypress logging industry eventually declined, but the scars of skidder canals—radial canals through the swamps where loggers used massive winches to pull trees to a central loading point—remain.

Spanish moss grows abundantly in cypress trees and local swamps. Collecting and selling moss became an important industry in the Atchafalaya region in the first half of the 20th century as a way for locals to supplement their income on a seasonal basis. Pickers would collect the moss by hand using boats and long hooked poles, cure it for three to six months and sell it to area moss ginning businesses. The moss was ginned and used to stuff furniture, mattresses and other items. The Pierre Part Store, which is still in operation today more than 100 years after its founding, conducted much of its early business through the trade of moss for goods.

From the 1880s to 1970s Pierre Part was ravaged by floods. After one such flood, a small, undamaged statue of Mary was found in the ruins of the local St. Joseph the Worker Catholic Church. To commemorate The Blessed Virgin Mary—believed to provide protection to this community still vulnerable to flooding and storm surge—a statue was placed on the nearby Virgin Island and has stood there ever since.